Jerwoods’ are presented with the ‘Coweslip Trophy’ 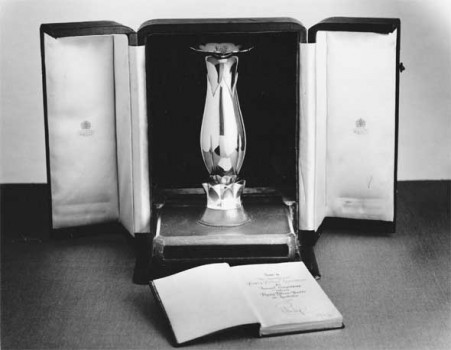 The Coweslip Trophy was presented to the Association by HRH Prince Philip in 1962 named after the Flying Fifteen Uffa Fox presented to HM Queen Elizabeth & Prince Philip as a wedding present. Prince Philip often sailed with Uffa Fox at Cowes in Coweslip. The Trophy is a little unusual as it comprises 2 parts firstly there is a silver trophy and rather than have the trophy engraved there is a book in which all of the winners are registered.  A second leather bound book has been produced to continue on the winning scripts words of wisdom. View all the winners at FFIA. Nick and Janet Jerwood won the Coweslip Trophy back in 2003 when they sailed their boat 'Spot the Difference'.  Janet and Nick had a short break from sailing the Flying Fifteen and returned a few years later with their new boat 'Ineffable'. Is this the year of the trifecta...National Championship in Esperance, World Championship in February/March Napier, New Zealand and FFIWA State Championships at Easter in Geraldton.

Comments Off on Jerwoods’ are presented with the ‘Coweslip Trophy’
Posted in 55th National Championship 2017 - Esperance, Past events
Current Month

The 2023 Flying Fifteen Australian Championships and World Championships will be held at Fremantle Sailing Club in Western Australia. To visit the event website, go here --> https://www.flying15worlds2023.com/ The Notice of